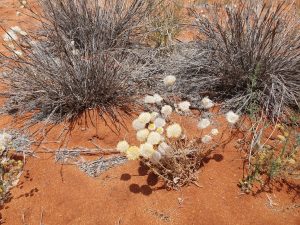 The plan was to camp at Agnes Creek (see photos) but as pleasant as it was there, I decided to move on to Marla to access the Internet. I have a web project itch that needs to be scratched. A few mild days forecast in this part of the world so I am leaving camp options open just for now.

The desert in SA so far definitely has the green tinge. According to the BOM many parts of central Australia have received between 25 and 100 ml in the last 30 days. It makes for some enchanting landscapes. Hopefully I can get some good images to demonstrate.

As I was driving down in overcast conditions, there was a clear sky to the east. The quality of the light reminded of a summer coastal region and it occurred to me that the only major obstacle between here and east coast was the Simpson Desert. It would be nice to access central Australia from the east instead of having to go all the way around.