The bus is a 1996 Toyota Coaster Deluxe LWB 6 Cylinder Deisal.

It was purchased in 2009 as a retired school bus in Roma Qld. From memory it had a about 350,000 km on the clock and was in reasonably good condition.

After purchase it was re-registered as a van with a reduced GVM so it could be driven with a standard licence. It has since been slowly converted into a camper and the conversion process is ongoing.

Apart from a couple of rust issues and normal wear and tear the bus has provided me with reliable and trouble free motoring.

The artwork on the side of the bus is from a photograph of Mount Augustus in WA, the world’s largest monolithe. The artwork is not real, it has been photoshopped on to make the bus look more interesting, but something similiar is a possibility in the future. 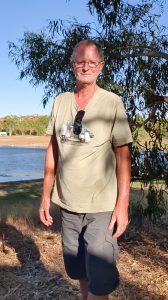 I have been travelling the highways and bi-ways of Australia for nearly twenty years, formerly as an itinerant farm worker but now as a semi-retired grey nomad.

I had originally planned to spend a few months in Asia on reaching retirement age but the arrival of covid-19 meant that Plan B needed to be implemented instead. This plan simply involved driving slowly around Australia in an anti-clockwise direction with the minimum of planning and direction. So far so good.

Note: This plan is contingent on the opening of state borders for covid-19. At the time of writing (26-09-2020) the WA was closed and likely to stay that way into the early part of 2021. All other states have agreed in principle to have state borders open by Christmas 2020.